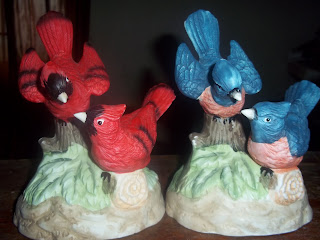 The two bird figurines above have always been among the favourites that Janine and I have had in our collection. We were always fascinated when we got Christmas cards from relatives, pen-pals and friends and saw a red cardinal featured amid the snow. I have even seen pictures that my cousin Marlene took of a cardinal during winter in her state of Massachusetts and it was such an awesome sight.  The other bird figurine features Eastern Bluebirds.


Year after year calendars featuring birds were sent to us as gifts from pen-pals around the world. We have also had bird books, pictures and postcards.  There was even a time when we collected postal stamps featuring birds. These stamps can now be seen in an album.

Since Janine's death I have written this poem. It says it all:-

Birds come in a dazzling array of colours.
I like to see them visiting flowers.
I had to start a bird figurine collection,
And now I have a wide selection.

They are such amazing creatures,
Some build nests of unusual structures.
Each bird's call is rather unique,
The woodpecker announces its presence by beak.

When you enter my home, you will have no doubt,
What a serious bird enthusiast is about.
Calendars and figurines showcasing these gifts of nature,
Each distinguished by a special feature.
Posted by Unknown at 7:53 AM 4 comments: